Asus is continuing the trend of high-end laptops for creatives with their latest flagship model: the ProArt StudioBook One.

The Windows 10 laptop features a 15.6-inch 4K UHD display, with an 84% screen-to-body ratio. Unsurprisingly for a high-end laptop for media production, the screen is PANTONE validated, and Delta E<1 color accuracy.

Running the show is an Intel Core i9 processor, and an Nvidia Quadro RTX6000 GPU. According to Asus, this is the only laptop currently sporting this new all-powerful GPU. This makes it unique, at least for now.

Other than that, 32 GB of DDR4 RAM and a 1TB PCIe NVMe Gen3 x4 SSD drive mean this laptop should handle anything you can throw at it. Despite the powerful setup, this laptop isn’t overly large. At 36.5 x 24.5 x 2.4 cm, and weighing 2.9kg, it’s a lot more portable than similarly specced gaming laptops.

Another unique detail of the ProArt StudioBook One is the design. The body of the laptop houses only the keyboard and the trackpad. Everything else, including CPU, GPU, Battery, and all cooling, is housed in the display.

When the laptop opens, the back of the screen hinges off automatically, creating a channel for better ventilation. According to an Asus rep, even at max capacity, the fans run at under 39 dB due to the new cooling system. 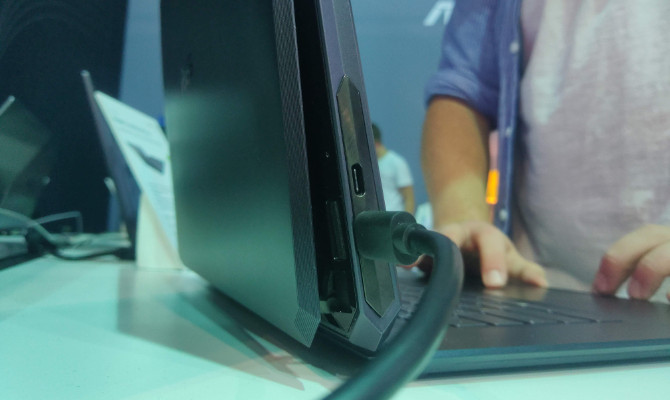 I had the opportunity to get some hands-on experience with the ProArt StudioBook One at the IFA 2019 tech conference. While I had no way of really putting it through its paces on the conference floor, it is clear that Asus has put a lot of new thinking into this flagship laptop.

One concern I had about housing the hardware in the display was the overall balance of the machine. Despite the top-heavy nature of the device, there were no obvious balance issues. This might be the first laptop that will be genuinely comfortable to use on your lap for long periods.

Where the Acer ConceptD 9 Pro

is large and features a touch screen, the StudioBook One is much smaller, and missing a touchscreen. Both laptops aim for the creative market, and both are absolutely top of the line. The promise that one-day desktop computers will no longer be needed—even for digital media and 3D modeling—seems to be coming true.

Asus provided no price for the ProArt StudioBook One, but you can expect this laptop to be priced high given the incredible specifications!

3 Essential Reminders Before Shipping Your Car

Is a sub $500 laptop worth the investment?

Drone Parts List: What Are the Parts of a Drone?

YouTube is one of the huge platforms to watch and share videos of any type. Frequently times, you stumble upon a video which you...

Android Shield 101: 7 Top Reasons Why You Should Have An Antivirus App On Your Android Device

For some people, an antivirus app is worthless for their Android device. Common sense is more than enough to protect your phone from all...

Stage 1: Gather your Materials and Resources For this project, you will need the following Tools: Hand drill (i love my dewalt) and bits...